The Roman Empire, also known as the Byzantine Empire, or Byzantium for short, was the historical period from 395 AD to 1453. Thus, Byzantine fashion dates from the 4th to the 15th century. The Byzantine people inherited many traditions from Rome, but were also influenced by styles from the East. Samples of brocades, which can be classified in the Byzantium period due to their motifs, can be found in the article.

A bit of history

In the 6th century, Justinian I the Great decided to gradually expand Byzantium (he had a vision of restoring the Roman Empire). He gradually expanded the territory to the Balkan Peninsula, Asia Minor and Egypt, adding the area around today's Tunisia, all of Italy and a bit of Hispania (today's Spain) in the south.

The education and culture of the Byzantine Empire was at a higher level - Greek was spoken, Athens was the center of events.

The Byzantine Empire ended in 1453 with the conquest of Constantinople by the Ottoman Turks.

Fashion in the Byzantine Empire

The Byzantine people inherited many Roman traditions, but were also influenced by styles from the East. The trade center was Constantinople, so luxurious fabrics (silk, cotton, etc.) were used, clothing was colorful and patterned (large reports with plant and figural motifs) and decorated with embroidered hems with precious stones.

Ornate, ostentatious, garments were available for the wealthier Byzantine fashion. Elite fashion changed over the centuries, the only things that remained were the basic elements of the costume.

The extreme luxury in which Byzantine fashion abounded influenced the vast majority of European medieval clothing. 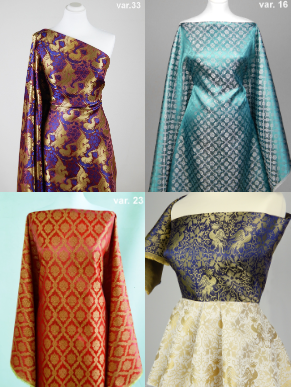 Brocade is also suitable for wallpaper

Previous article Next article
This website uses cookies to provide its services to improve your browsing experience. These include files that are strictly necessary to use the website, as well as technologies that are used, for example, to generate anonymous statistics, third-party tools to improve your browsing experience or to advertise personalised advertisements.